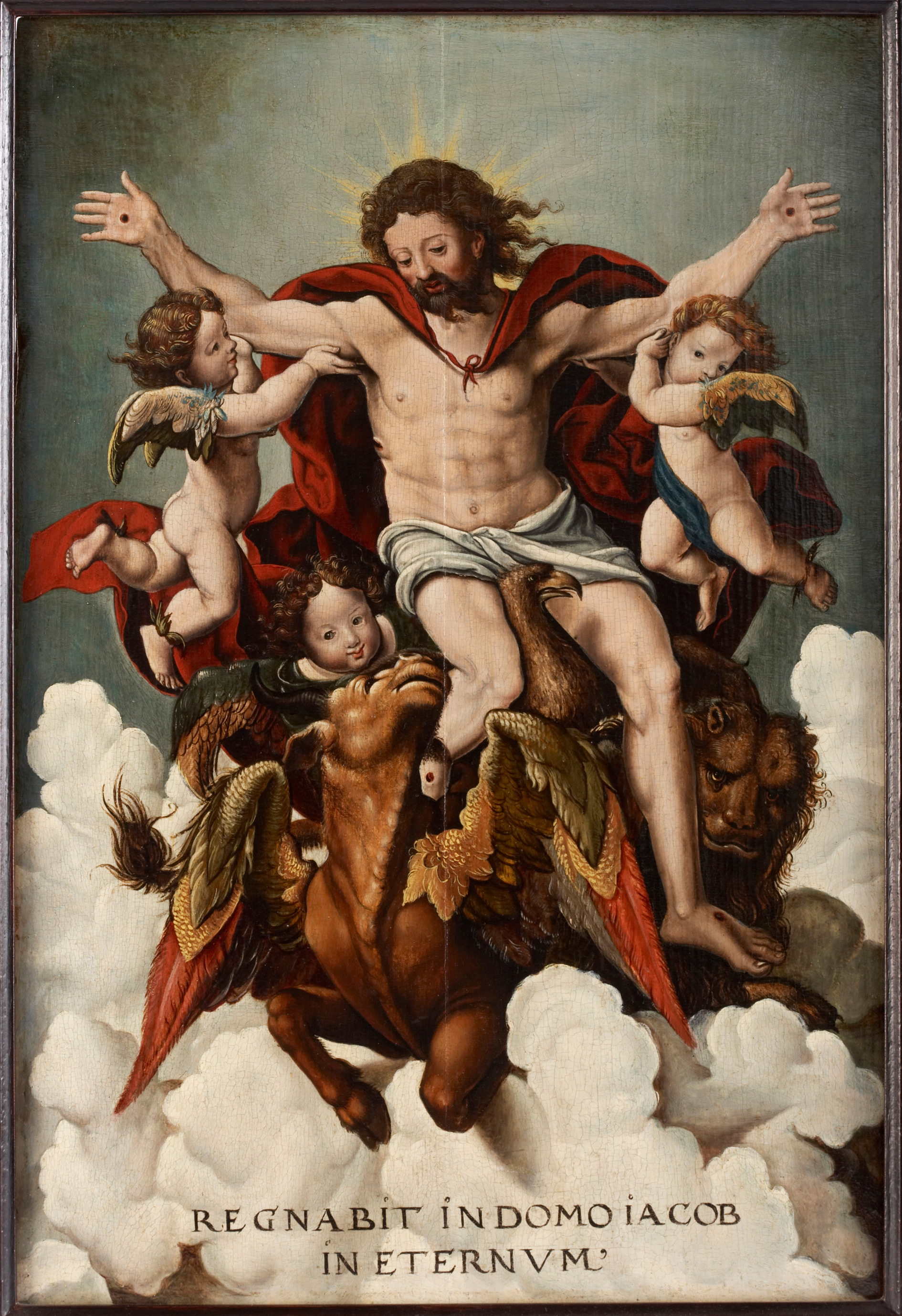 According to tradition, Pieter Coecke studied in Brussels with Bernard van Orley, then travels to Italy before settling in Anvers, where he is recorded as in independant master in 1527.

His travel to Italy must then be around 1524-1525. He travelled too to Constantinople in 1533, where he made engravings that were published by his widow in 1553. He had an important worshop, producing paintings, but also tapestries and stain-glasses.

Our painting refers to a Raphaël now in the Pitti Gallery in Florence, and two other versions are known, one formerly with the Medici family (now with the heirs of Federico Zeri), the other with a landscape and angel faces is in Munich. The inscription comes from St Luke : "He will reign on Jacob's house for eternity" part of the annunciation, and partly refers to one of Ezechiel's visions of the glory of God annoucing the coming of Christ the Redeemer. 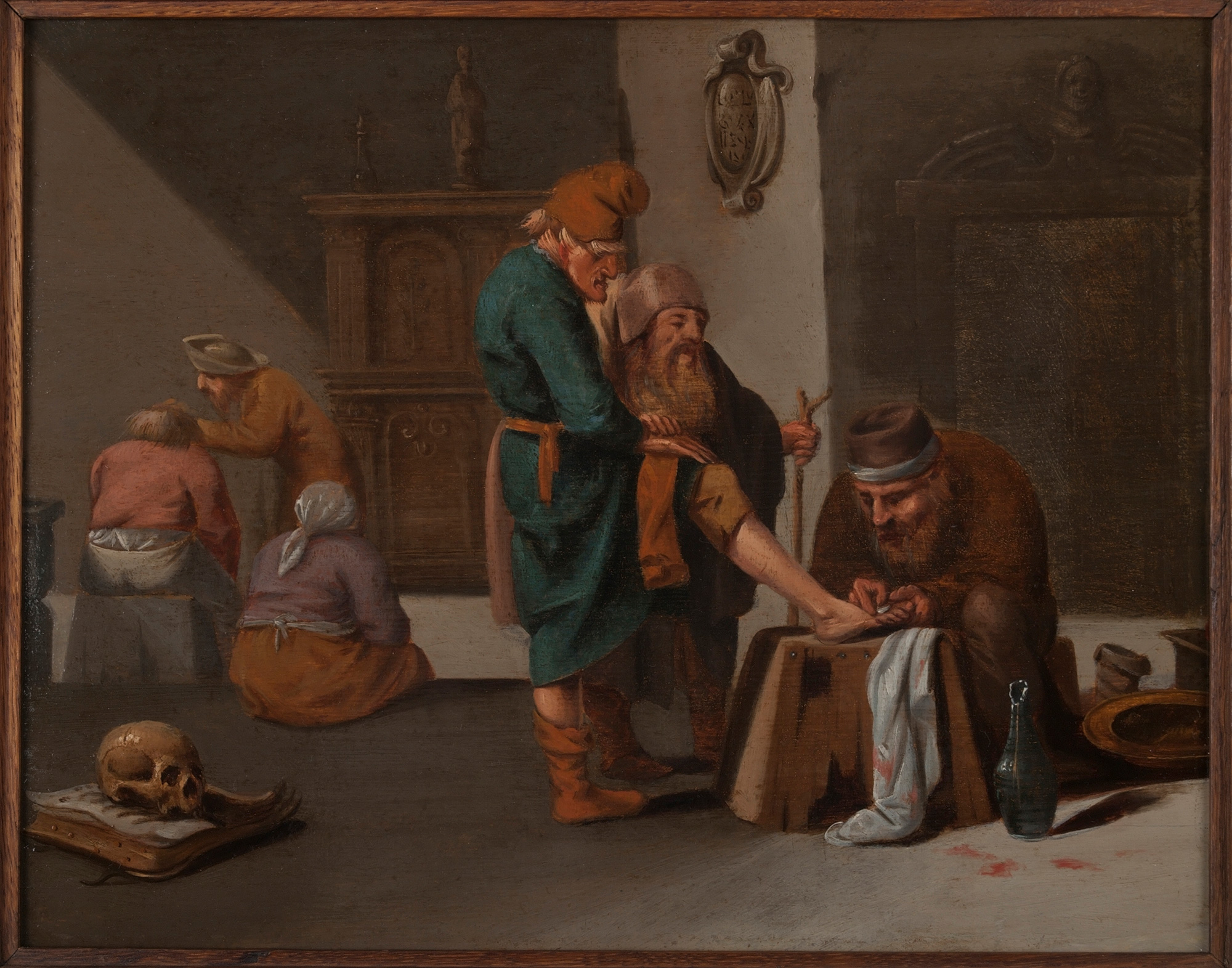 Pieter Quast is documented in The Hague, where he is member of the Saint Luke’s Guild, from 1634 to 1641, year of his definitive return to Amsterdam. He paints mainly genre scenes, merry companies of drinkers, smokers, or actors, but also beggars, without ever being vulgar. He also paints one figure pictures, half or full length, very often in green and beige tones. Our composition is known in several examples, slightly larger: Riksmuseum in Amsterdam, Italian trade (Caretto, Turin in 1995 ; these two versions bear initials) and another version with Lempertz in Cologne, (14 May 1994, n°449). 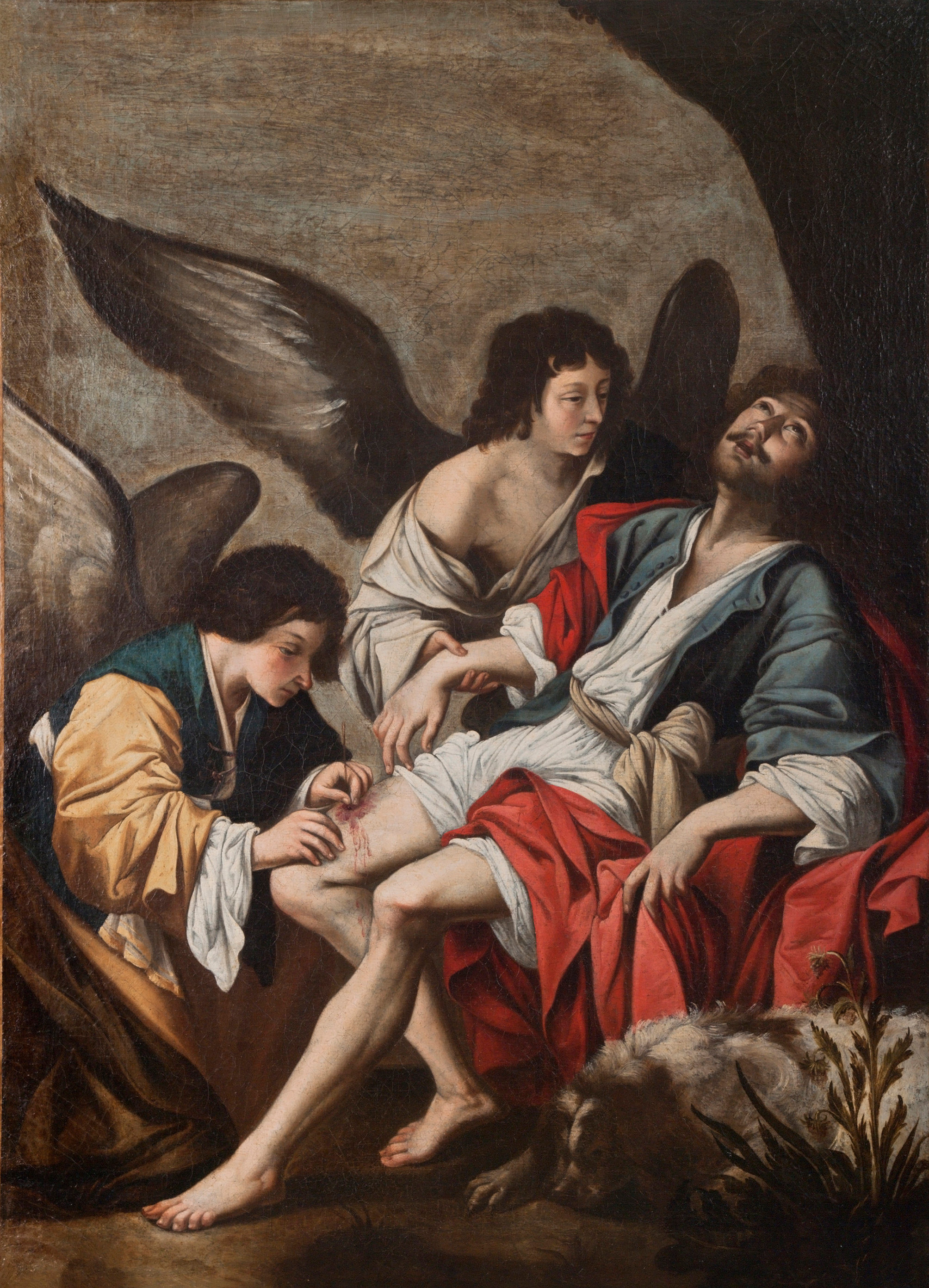 Saint Roch (1350-1380) was the son of a wealthy dealer from Montpellier; when he became orphan, he gave his heirloom to the poor and goes to Rome in pilgrimage, where he stays for three years. Back to France, while crossing the Apennines during a plague, he takes care of the sick, pray for them, gave the sacraments, and catches the plague. He hides in a wood so not to contaminate anybody. The dog of a local noble brings him bread daily, and an angel cures him. When cured, he goes back to Montpellier where nobody recognizes him, and is put into jail as a spy. He dies invoking Mary for the plague-stricken. Christ chooses him as plague intercessor. He was for long one of the most popular and represented saints.

The style of this painting is clearly indebted to Jean Leclerc (? circa 1588- Nancy 1633), who spent twenty years in Italy before returning to Nancy in 1622, crowned with glory for his painting Doge Enrico Dandolo appeal for the crusade, painted in 1620 for the sala del Gran Consiglio in the Doges’ palace in Venice. During his italian sojourn, first in Rome then Venice, Leclerc worked alongside Carlo Saraceni (1579-Venise-1620), whose style impressed him much and whose echo can be traced in Lorraine painting up to Georges de La Tour. Our painting derives from Saraceni’s Saint Roch in the Doria-Pamphili collection in Rome, painted circa 1610. Nonetheless, it is impossible to attribute our painting to Leclerc himself, but rather to an unidentified artist from his circle. We have been tempted by an attribution to Rémond Constant (circa 1575-Nancy-1637), but the comparison with Claude Beaujean’s ex-voto (Nancy, musée lorrain), dated 1636, shows some similarities, (in the figures of Sebastian and Roch), but also differences, in the landscape. Our anonymous artist could be the same author that the Martyrdom of saint Sebastian, in the Saint Nicolas church in Nancy, still recently attributed to Leclerc himself.

This beautiful and very decorative still life must be attributed to an eighteenth century neapolitan artist: it compares perfectly with a signed painting published by Luigi Salerno (La natura morta italiana 1560-1805, Rome 1984, fig.59.1, p.239): same way to spread fruits and vegetables in a very decorative way. Other paintings by this otherwise unknown artist always show the same scheme, with an open watermelon and a white and blue glazed terracotta vase.

A Giuseppe Lavagna is known for his still life paintings, preserved in Spain. We know by De Dominici, in his biographies of neapolitan artists, that he was a student of Andrea Belvedere, and died blind at the age of forty in 1724, but we ignore his relationship with Francesco. 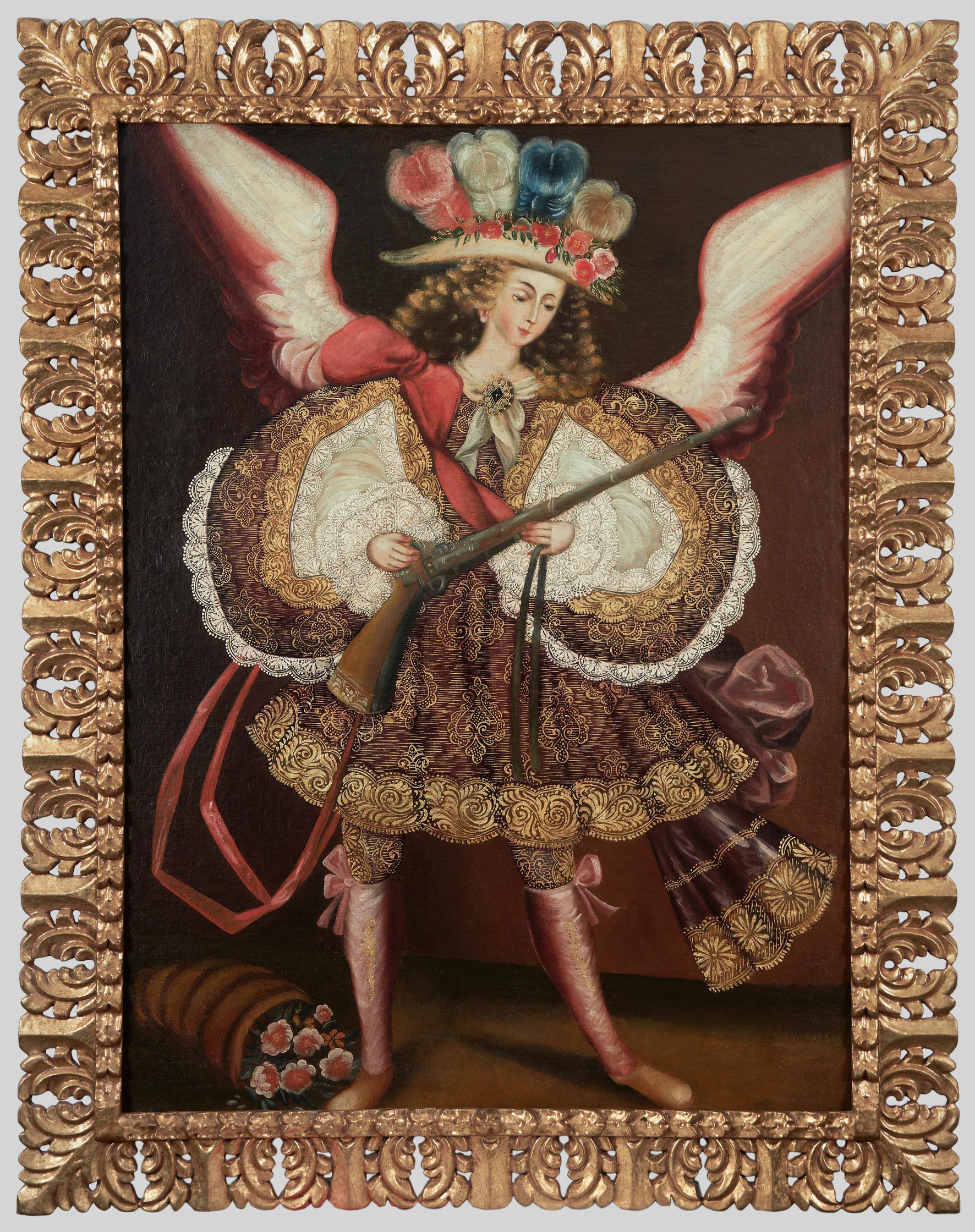 Formerly in the collection of Emile Français (1894-1984, important sting-instrument maker)

The School of Cuzco, the former capital of the Inca Empire, develops under the impulsion of Spanish artists, who created a school for the Quechuas and the mestizos (descending both from Spanish and Amerindians), teaching drawing and oil painting. The paintings are essentially of didactic vocation, the goal being to convert the Incas to Catholicism. In 1688, the Spanish and mestizos members of the Cuzco school departed from the indian artists, which brought many Quechua painters to develop their own style, based on recent European works. This style can be defined as at the crossroads of baroque influence introduced y the Spanish and Indian and half-breed traditions and is characterized by the massive, if not abusive, use of bright colors and gold heightening (as is here the case), and the arquebusier angels are a favorite motive of these artists. It is under the influence of European prints introduced in the Andes that the weapons of the celestial armies changed: the usual shields, spears, swords, were replaced by arquebuses, fire weapon from Renaissance Europe. It is possible that our artist took for inspiration a print after Guido Reni’s Saint Michel from the church Santa Maria della Concessione in Rome. The parish church of Calamarca, La Paz (Bolivia) owns a series of ten arquebusiers angels, dating from the late seventeenth century, where we find a figure very similar to ours, with different clothes, figuring Uriel Dei, the fourth of the seven major archangels known in the Western world. He is rarely represented alone, but we know a painting attributed to Zurbaran’s workshop in Lima. He also appears as a military with armor in the Urquia series (north of Argentina). Our painting, with its bright colors, its opulent gilding, or the multicolored feathers crown demonstrates clearly this blend of cultures typical of Andine painting. 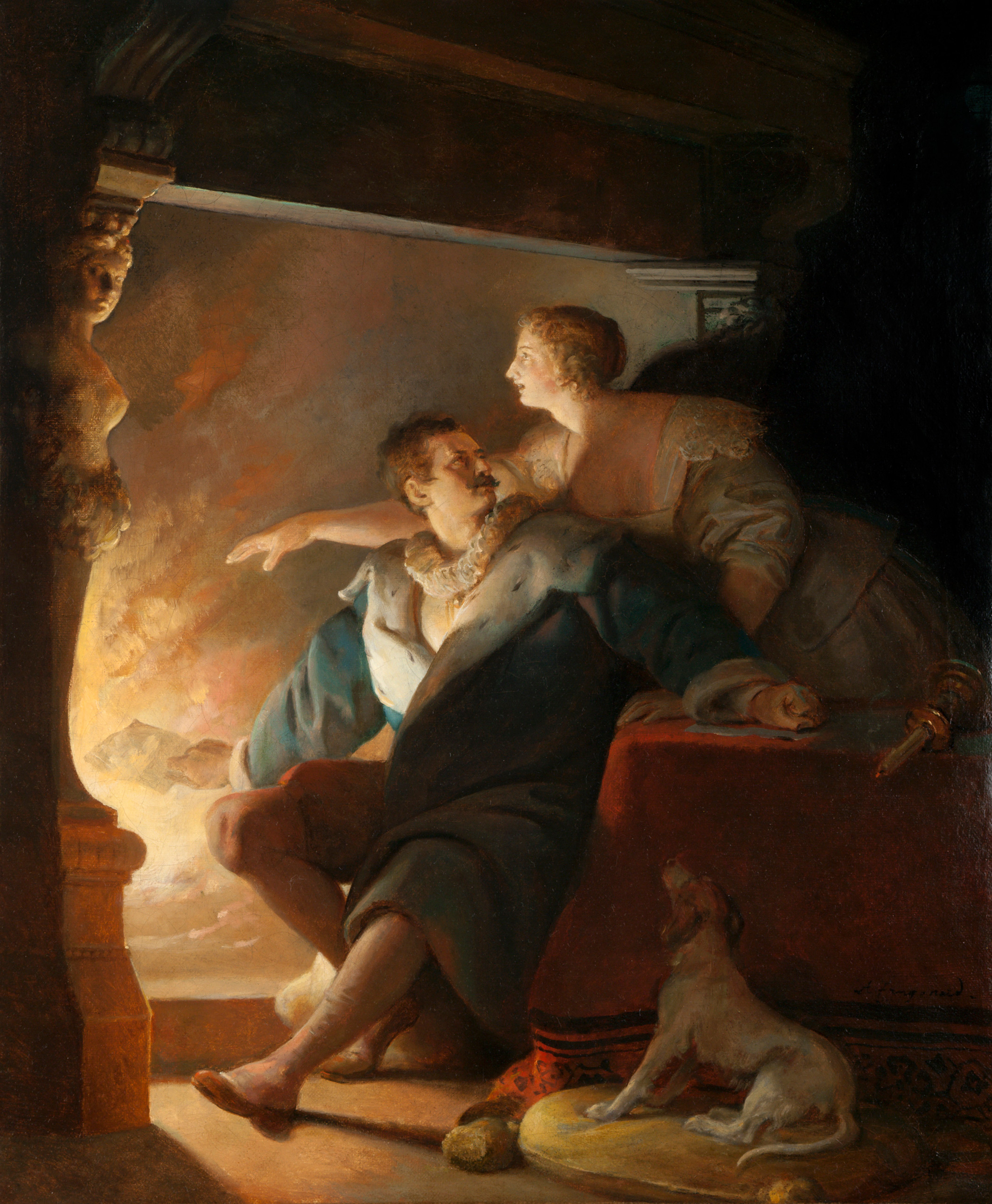 Son of the famous Jean-Honoré, Alexandre –Evariste Fragonard enters at the age of twelve in David’s workshop ( 19 September 1792 exactly)as an apprentice, and will make his official débuts at the 1793 Salon, where he exhibits on a regular basis until 1842.During all his career, he shows a prolific activity as History painter (from Antiquity to modern times), costumes for the Opera, projects for Sèvres (from 1804 to 1839), drawings for the Voyages pittoresques et romantiques dans l’ancienne France, projects for tapestries and wallpapers, great decorations (for Lucien Bonaparte, the palais Bourbon, the Louvre). In his history paintings, he shows a decisive interest for Renaissance scenes, especially French subjects and the Valois Court. We have been unable to identify the subject of our painting, that costumes date at the end of the sixteenth century, the ermine coat of the male figure designs a royal birth though the setting of the scene has nothing of a palace. Should we search among hors mariage adventures, such as Charles IX and Marie Touchet ? 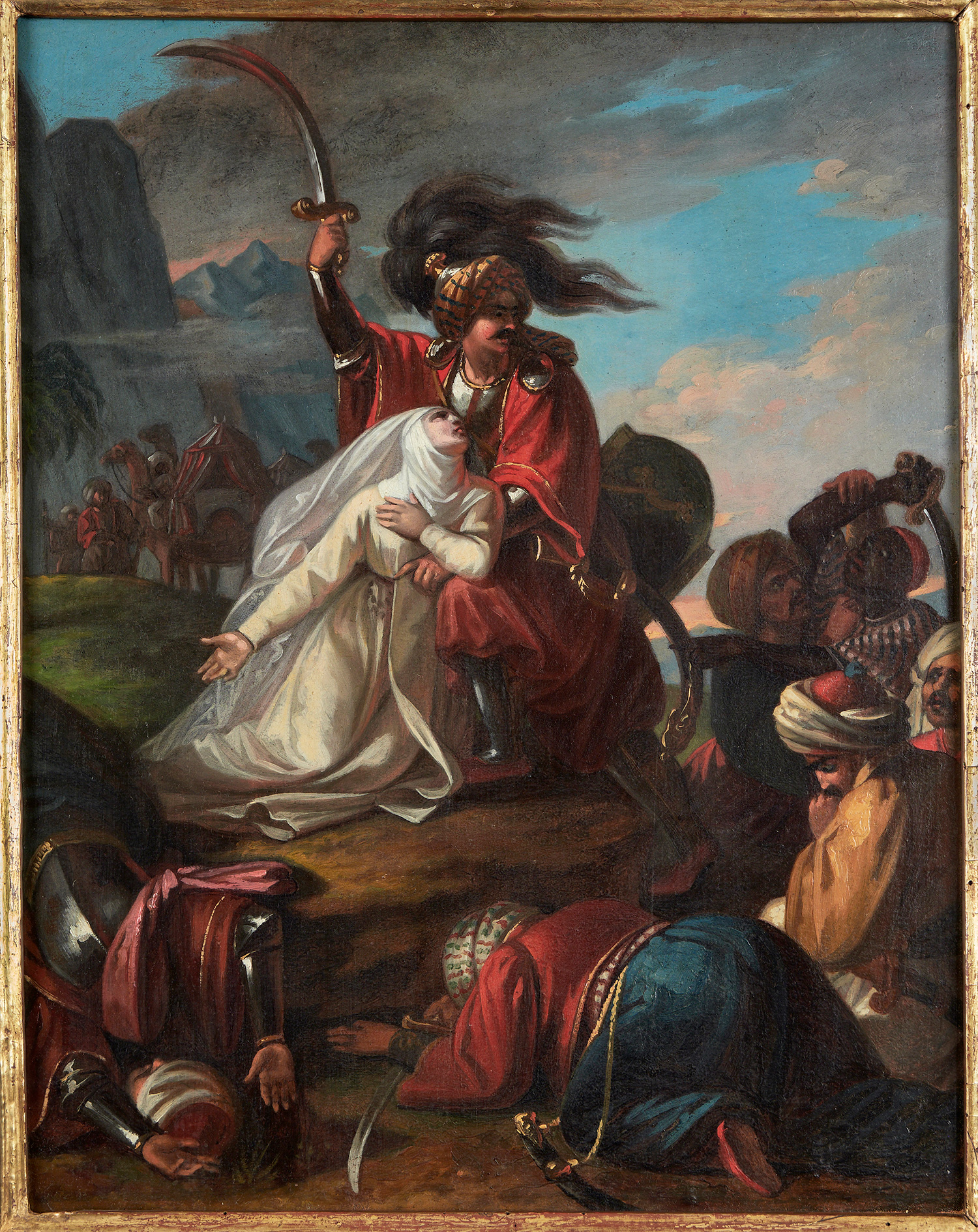 Oil on paper mounted on canvas

A long inscription at the back of the canvas tells us about the subject, taken from a the famous novel by Sophie Cottin published in 1805 « Mathilde ou mémoires tirés de l’histoire des croisades », which describes, with many episodes, the impetuous passion and pudic love between Mathilde, sister of Richard Brave Heart, and Malek-Adel, Saladin’s brother. We also learn that the final canvas (lost) was painted for a « Sig. Enghard americano », of whom we know nothing.

Cesare Mussini was born in Berlin, where his parents musicians were employed by the Prussian king. The family came back to Florence in 1818, and in 1820 Cesare enters the Accademia di belle Arti where he studies under Pietro Benvenuti, then the major local artist. In 1828 his painting Leonardo da Vinci expiring in the arms of François Ist (Florence, galleria d’arte moderna, palazzo Pitti) wins a prize that enables him to go to Rome (where he befriends with the French circle of Chateaubriand and Vernet, but also Mendelssohn) until 1832. Back in Florence, he paints lots of portraits for aristocratic and international clients, and teaches at the Accademia from 1834. 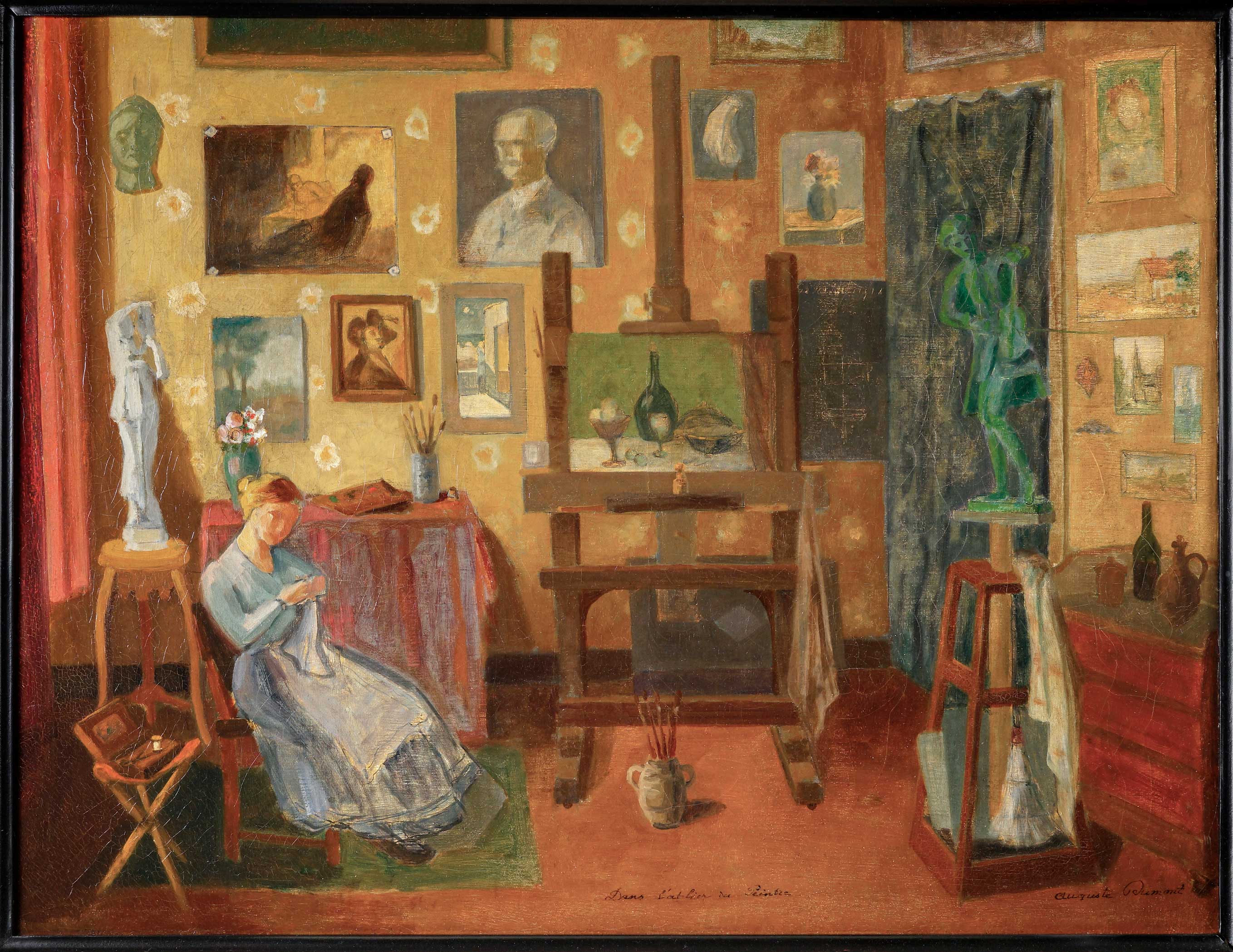 Auguste Dumont, whose dates are unknown, studied with his father and Hippolyte Léty. He exhibits at the Salon des Artistes français from 1928, until1930, in the painting section : in 1928, he presents « moulin en Flandre » (« windmill in Flanders »), in 1929, « le cheminot » (« railway man ») and « neige et soleil » (« snow and sun »), and in 1930, « Béguinage à Bruges » (“Beguine convent in Bruges”) et « Château de Formanoir, Templeuve » (“Formanoir Castle, Templeuve”), titles evoking contemporary Belgian painting, such as the Laethem Saint Martin group. We know that in 1929 he lived in Tourcoing. In our painting,we can recognize on the walls « supper at Emmaüs » by Rembrandt (Paris, Jacquemart-André museum), « Sainte Geneviève watching on Paris » by Puvis de Chavannes (Panthéon), and on the turntable a sculpture by Louis-Ernest Barrias « Mozart playing violin ».